From Struggles to Sweet Dreams: How to Stop the Bedtime Tantrums 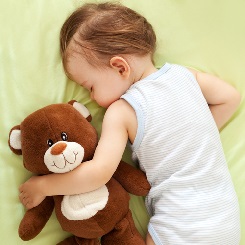 If every night seems to be a struggle filled with cries of “I’m not tired” and “I can’t sleep,” it’s time to turn those struggles into sweet dreams. Your child is likely to use every possible excuse to get out of that bed and continue playing or cuddling with you on the couch, and who can blame her? Snuggles are important for children.

However, so is rest. Bedtime battles take place in most homes with young children. One more story, one more sip, one more trip to the potty and cries when you leave the room can leave the both of you exhausted and sleepless. “We can’t escape it, but understanding and breaking the code of what your child’s behavior means underneath can smooth out developmental transitions,” says Ava Parnass, child therapist and author of Listen to Me Please! Time-In Not Time-Out.

It’s hard for children to let go of their grown-ups at night, says Parnass. “Each ‘goodnight’ seems like ‘goodbye forever’ at this age,” she says. “We need to put ourselves in their little shoes. They’re still unsure that they’ll wake up and their parent will be there, monsters seem real, and the darkness appears mysterious and frightening.”

As a parent or nanny, it’s important to be a detective to figure out what your child is feeling. Often, what is most helpful is to process the events and feelings of the day with your child, says Parnass.

“By thinking about what your child is saying with his crying and helping him put the feelings into words, bedtimes will become easier,” she says. “A time-out concept of saying ‘go to sleep now or else you won’t play with your friend tomorrow’ or leaving them hysterical in their room may work for the short term, but it doesn’t work in the long run because your child isn’t learning any new skills.”

Unexpressed feelings constantly disguise themselves in your child’s behavior. For example, maybe they missed you during the day or an argument occurred on a play date, says Parnass. “These events can exacerbate normal separation anxiety, intensifying and prolonging the bedtime battles,” she says.

Bedtime is not the time to get into big conflicts because it’s not conducive to a restful night’s sleep, says Aricia LaFrance, Colorado-based therapist and parenting instructor. “If they fight you on teeth brushing, do that right after dinner and in the morning, but not at bedtime,” she says. “If they hate the tub, you can find some solutions, but bedtime may not be the best time to get into it.”

Instead, stick with soothing, relaxing activities, suggests LaFrance. “Involve the kids in putting together their bedtime routine and their bedroom,” she says. “They pick out their jammies, their pillow, their snuggle buddies at bedtime.”

Music can be a soothing part of a bedtime ritual, as well as meditation or prayer, she says. “The important thing with any bedtime ritual is to keep it fun, relaxing, enjoyable and to make it exclusive to bedtime,” says LaFrance.

Routines, if used consistently, can minimize the bedtime struggles, says Kristen Race, founder of Mindful Life. “The ritual of a healthy routine prepares children’s minds and bodies for sleep,” she says. “When children know what to expect they are much less likely to resist changes and can easily transition from one activity to the next.”

Unpredictability can cause feelings of anxiety and the result is resistance, says Race. “A healthy routine starts at dinner and can include playtime, bathtime, clean-up, snack, books, snuggle time and other soothing activities,” she says. “Limit screen time, too, especially after dinner. Even educational programs can elicit a stress response in your child’s brain, making it more difficult for them to fall asleep easily.”

Once a healthy routine is established, it is easier to enter the routine when busy schedules arise. For example, if you have dinner at a friend’s house and return home late, you might have to jump into the routine in the final steps (such as snuggle time or reading time). “This works fine when your children follow a routine most of the time,” says Race.

Let your child help create the routine, too. “Lay out pictures of the elements you would like to include in the routine, such as playtime, bath, brush teeth, etc. and let them create their own chart for nightly events,” says Race. “And give young children tons of choices. When you give children choices, offer them two options, both of which you will be ok with them choosing, such as ‘would you like to wear the red pajamas or the blue?’”

Primarily, plan ahead and take time to help your child relax through bonding activities that will help not only put them to sleep, but also give them peace of mind. “Taking time each night to connect with your child in this way will play a critical role in the choices they make, goals they achieve and their relationships in general as they grow,” says Race.

0saves
Save
If you enjoyed this post, please consider leaving a comment or subscribing to the RSS feed to have future articles delivered to your feed reader.
← 10 Special Skills to Look for in a Nanny | The Best Things You Can Eat →