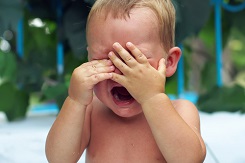 Your toddler is full of excitement and wonder, discovering the world at all times. But when things don’t go his way, a meltdown is likely to ensue. Temper tantrums are a normal phase of toddlerhood, which is defined as 18 months to four years of age, says Dr. Fran Walfish, California-based psychotherapist and author of “The Self-Aware Parent: Resolving Conflict and Building a Better Bond with Your Child.”

“He has many objectives to achieve during this crucial period of development and many parents do not know how to help their growing children reach these milestones,” says Walfish.

As a parent, uncover the top 10 reasons your toddler may head toward meltdown mode and learn how to prevent them before they spin out of control.

Even though there is no surefire method of avoiding meltdowns at all times, according to Kennedy-Kline, it’s important to recognize that toddler tantrums are a form of expression that will eventually fade as your child acquires the ability to handle conflict and frustration. “The best thing is to remain completely calm, and never engage in a fight or argument with an escalating child,” she says.

0saves
Save
If you enjoyed this post, please consider leaving a comment or subscribing to the RSS feed to have future articles delivered to your feed reader.
← 10 Steps to Getting Your Child to Stay in His Own Bed | 70 Places to Take the Kids in Houston →